I’ve always had this strange fascination with elephants. Perhaps it’s something to do with a time a herd of wild elephants almost crushed me and my family to death – as recounted in the first chapter of Jungle Submarines.

I recall the first time I rode an elephant. I must have been three, and we had taken a trip down from Shillong to the Kaziranga National Park in Meghalaya. For a small fee, one could have an “elephant safari”. Perhaps we were traveling with some other folks, because I remember we had not one, but two elephants assigned to our group, after Papa paid the requisite fees. I remember we had to climb up onto a platform, maybe eight or nine feet high; an elephant lumbered up, driven by his mahout, and we clambered onto the large inverted basket perched precariously on the elephant’s back. The basket had a couple of thin ribs laid across its width for people to sit on.

I rode on the elephant with Papa and Mama, while Minu, Anu, and some strangers rode on the other elephant. It was good that they split us up, because I dug up these photographs of the event. I wonder how Papa trusted his darling Minu and Anu with some people who are obviously hoodlums on the other elephant… The villain with the suit and dark glasses is particularly well dressed for the occasional elephant ride.

How was the ride, you ask? I can tell you it was not pleasant! Imagine, if you will, that you are riding in a large squirming wooden car that has square wheels (of different sizes) running on a bumpy road. That was how it felt. The elephant lurched drunkenly across the field, changing direction at random, with the mahout doing precious little to guide its direction. I clung desperately to Papa and Mama as I was flung to the left and right. The sea-sickness bloomed in my stomach. Papa was busy taking photographs of the other elephant; he didn’t have time to look after little me. Nor did Mama, who was chatting with the mahout.

In due course, the elephant waded into a patch of elephant grass – grass so tall that it reached almost up to the elephant’s back. Here the elephant’s gait changed, but for the worse! Besides the yawing motion, there was now a violent pitching as the elephant stumbled its way through the grass. All I remember is that I closed my eyes and clung on for dear life for what seemed like an eternity, till the elephant finally drew up to the exit platform.

I was all grown up the next time I rode an elephant. I remember it was on a bachelors’ trip with some friends of mine. We drove down to this elephant camp in the south of Karnataka. They had several “jungle” activities: one where they drove us through a field full of wild elephants, another where we rode elephants and were taken to see the wild gaur and wild dogs. Apparently these wild critters don’t mind elephants approaching them, even when they have a bunch of sweaty humans clinging to their backs.

This ride was better than the first one. The elephant seemed less drunk, the mahout more in control. Also, there was no elephant grass to cause the pitching motion… After a fruitless hour wandering through the jungles looking for a wild gaur or even a tiny wild pup, we returned to the base camp. I got back to land without too much of sea-sickness but with a bladder nearly bursting, as I had unwisely consumed two or three delicious coconuts that the mahout stocked in the jungle mini-bar on the elephant’s back, without realizing there was no jungle mini-potty. I swore never to ride an elephant again.

I met this amiable gentleman who had the impression that we rode animals all over the place in India.

Some years ago when I was working in the US; and I met this amiable gentleman who had the impression that we rode animals all over the place in India. This was in the days before all the tech company’s CEO’s were Indians. He obviously owed his knowledge of international affairs to a steady diet of Hollywood films such as Indiana Jones series. He asked me (kindly but seriously) whether it was difficult going to office in India, what with all the animals, etc.

I strung him up good. I told him that the rich people rode on mules or buffaloes, while ordinary blokes like me had to catch the regular elephant that passed by my house. I told him about the 50 kilos of bananas that the elephants fueled up on at the banana-stations; about the poop collecting wagons that patrolled the roads, scooping enormous quantities of elephant dung off the roads; about the HOV lanes meant especially for elephants and camels… I think it was at this point that he realized I was pulling his leg. We had a merry laugh about it! 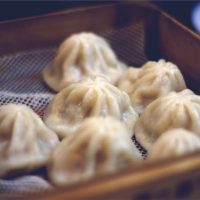 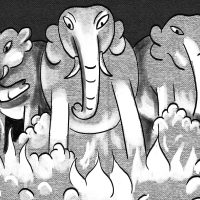